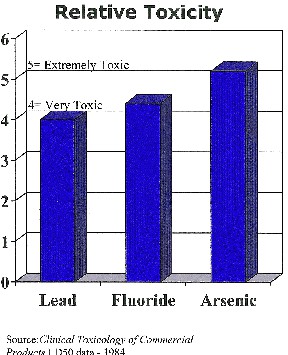 The Office of Health and Hazard Assessment (OEHHA) of the California EPA calculated that a level for a one-in-a-million risk is 1.5 parts per trillion – 3000 times less than the level PROPOSED TO TAKE EFFECT IN 2006 by theUS Environmental Protection Agency. It would be impossible to set a regulatory limit this low and enforce it since no municipal water supply could meet it.

Arsenic may be found in water which has flowed through arsenic-rich rocks or is contaminated by industrial waste products and chemicals. Severe health effects have been observed in populations drinking arsenic-rich water in countries world-wide. The human body can excrete arsenic only at a certain maximum rate. This rate may vary with the individual but when arsenic is ingested at a rate greater than can be excreted by the kidneys, it will build up in the liver, spleen and blood because arsenic is a cumulative poison. However it is possible to help people if arsenic can be excluded from the diet altogether, in which case whatever has accumulated in the body, this will be excreted within a matter of days or weeks with the exception of the portion that has been sequestered in the nails and hair. What this means in practical terms is, if the patient is able to drink only arsenic-free water & eat food without arsenic, and provided the victim has not reached the point of no return, he will be put back on the road to good health over a period of time.

Where Does It Come From?

Drinking-water poses the greatest threat to public health from arsenic. Exposure at work and mining and industrial emissions may also be significant locally.

WHO’s [World Health Organization]activities on arsenic
WHO’s norms for drinking-water quality go back to 1958. The International Standards for Drinking-Water established 0.20 mg/L as an allowable concentration for arsenic in that year. In 1963 the standard was re-evaluated and reduced to 0.05 mg/L. In 1984, this was maintained as WHO’s “Guideline Value”; and many countries have kept this as the national standard or as an interim target. According to the last edition of the WHO Guidelines for Drinking-Water Quality (1993):

The summary of an updated International Program on Chemical Safety Environmental Health Criteria Document on Arsenic published by WHO is available at http://www.who.int/pcs/pubs/pub_ehc_num.html . It addresses many aspects of risks to human health and the environment.

A UN report on arsenic in drinking-water has been prepared in cooperation with other UN agencies under the auspices of an inter-agency coordinating body (the Administrative Committee on Coordination’s Sub-committee on Water Resources. It provides a synthesis of available information on chemical, toxicological, medical, epidemiological, nutritional and public health issues; develops a basic strategy to cope with the problem and advises on removal technologies and on water quality management. The draft of the report is available at http://www.who.int/water_sanitation_health/dwq/arsenic3/en/ Information on arsenic in drinking-water on a country-by-country basis is being collected and will be added to the UN report and made available on the web site.

As part of WHO’s activities on the global burden of disease, an estimate of the disease burden associated with arsenic in drinking-water is in preparation. A report entitled “Towards an assessment of the socioeconomic impact of arsenic poisoning in Bangladesh” was released in 2000.

The delayed health effects of exposure to arsenic, the lack of common definitions and of local awareness as well as poor reporting in affected areas are major problems in determining the extent of the arsenic-in-drinking-water problem.

Reliable data on exposure and health effects are rarely available, but it is clear that there are many countries in the world where arsenic in drinking-water has been detected at concentration greater than the Guideline Value, 0.01 mg/L or the prevailing national standard. These include Argentina, Australia, Bangladesh, Chile, China, Hungary, India, Mexico, Peru, Thailand, and the United States of America. Countries where adverse health effects have been documented include Bangladesh, China, India (West Bengal), and the United States of America.

The governing laws in the USA is The Safe Drinking Water Act [federal] some states and other countries have there own standards for water we drink, the Clean Water Act for water in rivers and other locations, the super fund law for arsenic in various waste sites.   The United States Environmental Protection Agency (EPA) is the major agency in the USA trying to cope with the these laws and their problems.  But although the fact that long term medium level arsenic exposure leads to chronic health problems was known in 1986, it was basically ignored by EPA till 2000.   The Office of Health and Hazard Assessment (OEHHA) of the California EPA calculated that a level for a one-in-a-million risk is 1.5 parts per trillion – 3000 times less than the proposed level. But it would be impossible to set a regulatory limit this low since no water supply could meet it.  Moreover arsenic in take into people would be dominated by arsenic in foodstuffs .  After much travail, the US Environmental Protection Agency in January 2001 finally issued a regulation with a new standard for drinking water of 10 ppb to take effect in 2006. This was confirmed on October 31st 2001 by the new EPA administrator, Christine Whitman.