Bottled water companies often seek out rural areas with clean natural springs to bottle and sell to consumers. Unfortunately, they often pay no heed to the local residents or the environment they live in. While most small bottlers take the water as it naturally bubbles up, many large bottlers pump out the groundwater and springs with high-capacity wells. These wells can cause groundwater drawdown, drying up area residents’ wells (seeGroundwater Drawdown ). Today, many residents are fighting back and winning. Using a variety of methods, including legislative changes, local referenda, and boycotting, these groups have managed to say “no” to multinational water corporations. 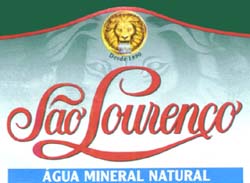 “The Circuito das Águas region of Brazil contains one of the most important Brazilian national parks, the Itatiaia Park, known for its famous mountain peak, the Agulhas Negras (Black Needles). The mineral water sources are concentrated in ‘water parks’ distributed among 4 small towns: São Lourenço, Caxambu, Cambuquira, and Lambari. Towns were founded around these water parks in the 19th century, when the water sources and their medicinal properties were discovered.” Franklin Frederick, an advocate of the International Free Water Academy, Brazil also described some personal experiences. “About 3 years ago many people in São Lourenço…began to notice a change in the taste of the mineral waters inside the Water Park, and one of the most famous water sources there, the Magnesiana, dried up and stopped flowing. Water usually needs hundreds of years inside the earth to be slowly enriched by minerals. If it is pumped in quantities greater than nature can replace it, its mineral content will gradually decrease, bringing the change in taste that we were noticing.” (1)

Nestlé produces purified water labeled ‘Pure Life.’ The company violated all laws in the bottling of mineral water, when their production process produced common water by reverse osmosis. This process changed the natural composition of the mineral and healing waters. The huge amount of water that is pumped nonstop to meet the industry demand is lowering piezometric levels of the aquifers, diminishing flow and has used up one of the fountains, (the magnesian water) to below replenishable levels. The peculiar and discernible tastes of the waters of the different fountains are gone, and tourism was affected by all these conditions. (2)

In the article, Water as a Multidimensional Entity , Frederick went on to describe action taken by some of the locals. “… We created the Water Citizenship Movement and collected information about production of Pure Life. We discovered that Nestlé/Perrier was pumping huge amounts of water in the park from a well 150 m deep. The water was then demineralized and transformed into Pure Life table water. As the Brazilian constitution does not allow mineral water to be demineralized, we brought our findings to the attention of the public prosecutor of the State Public Ministry in São Lourenço, who began an official investigation of Nestlé/Perrier’s activities in São Lourenço. This led to charges against the company at the end of 2001, and a federal investigation of Nestlé/Perrier. Meantime, we organized citizen protests against the company and collected 3000 signatures on a petition.” (1)

Towns of Newport and New Haven, Wisconsin vs . Perrier

In 2000, Perrier informed the residents of two townships near Wisconsin Dells that they had a plan to begin continuous pumping of 500 gallons per minute of Big Spring into bottles (3). The company promised that pumping would have no effect on the local lakes and streams, and that it would bring jobs and money to the local economy. Many local people started asking “Who needs this?” says Hiroshi Kanno, a local resident. Many of the local residents are retirees who did not need jobs or large trucks rumbling by. Residents got together, putting up signs along roads reading “Go Away Perrier!”. The towns even held referendums, voting 4-1 and 3-1 against letting Perrier pump the water. Perrier came back, giving the town $20,000, and launched a public relations offensive; the people of New Haven stepped up their community organizing. After the town chairman accepted the money, the residents held a recall, voting 263-92 against the chairman. Once the new chairman was in charge the people gave the money back to Perrier (4).

The majority voice of the residents was not enough. Governor Tommy Thompson and the Wisconsin Department of Natural Resources (DNR) gave Perrier the permits it needed to pump. A group called Concerned Citizens of Newport (CCN) filed a lawsuit against the Wisconsin Department of Commerce and DNR on a number of grounds, claiming that the DNR violated its duty to protect the Public Trust, the DNR violated WEPA (Wisconsin Environmental Protection Agency) by not adequately identifying and mitigating significant environmental impacts, and by dividing Perrier’s proposed water bottling operations into segments, among other objections (5). After a year, a judge decided that the DNR had not gathered enough data to show there would be no significant impact on the environment.

“In September 2002, Perrier announced that it would not seek to renew its drilling permits in Wisconsin. The CEO of Perrier was quoted as saying that his Wisconsin experience was the worst his company had ever had, and that the people of Wisconsin do not appreciate a good business. Perrier has since turned its sights towards Michigan.” (6)

“… In 2001 Perrier, which has since been bought by Nestle Waters North America [NWNA], was welcomed with open arms by then-Michigan Gov. John Engler, who allowed the company to open up a plant for a licensing fee of less than $100 per year and offered millions in tax breaks to boot. Construction started on the plant even before all the necessary permits had been obtained. For the past year and a half, the plant has been pumping 100 to 300 gallons per minute out of an aquifer on a hunting preserve in Mecosta County and piping the water 11 miles away to a bottling plant in Stanwood, where it is prepared for shipping and sale around the Midwest as Nestle’s Ice Mountain brand.” (7)

“Shortly after the pumping plan was announced, a grassroots movement of local residents and activists coalesced to oppose the plan, on the grounds that not only would the pumping have harmful effects on the environment and quality of life for residents, but it would also set a chilling precedent in selling off the area’s natural resources to a multinational company. This coalition has used both legal and direct action approaches to raise awareness of the issue and try to stop the pumping plan. Among other things, the group Sweetwater Alliance, which has coordinated much of the grassroots opposition, staged a ‘canoe-in’ along one of the streams fed by the spring.” (7)

“In the fall of 2001 the group Michigan Citizens for Water Conservation (MCWC) along with four individual local residents filed a lawsuit in Mecosta County Circuit Court seeking to prevent the pumping, arguing that it was not a legally defined ‘reasonable use’ of water and violated state and federal regulations regarding water rights.” (7)

In late November 2003, Mecosta County Circuit Court Judge Lawrence C. Root ruled against NWNA, forcing the company to shut down four high- capacity springwater wells. This renders its already operational 700,000 sq. ft. bottling facility in Stanwood useless. In the ruling, the judge noted “Defendant Nestle was cautioned that it was proceeding in building a bottling plant at its own risk should I decide plaintiffs’ claims have merit such that there might be no water to be bottled in the plant.” (8) Such a ruling will likely make way for new groundwater legislation, as promised in 2002 by Governor-elect Jennifer Granholm. 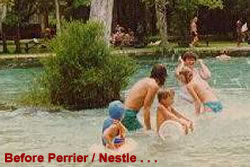 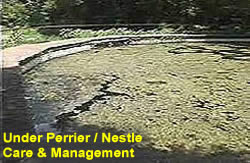 Another ongoing struggle against bottled water has been happening in Crystal Springs, Florida. Crystal Springs flows directly into the Hillsborough River, which is the main drinking supply for the city of Tampa. For 20 years, owners of the spring, the Thomas family, maintained the spring and kept it open to the public while developing a lucrative deal to sell water and truck it to the Zephyrhills bottling facility. “When Perrier/Nestle purchased the Zephyrhills Water Company in 1987, things began to change. To accommodate Perrier’s increasing demand for water, Bob Thomas suggested they install a PVC pipe in the heart of the spring to pump water underground to the bottling plant. By the early 1990s, Perrier’s plans for the spring broadened to include larger steel pipes and pumps to upgrade their operation.” (9)

In 1996, Bob Thomas, President of Crystal Springs Recreation Preserve, locked the gate and closed the spring to the public. This was justified in a public announcement saying he planned to conduct scientific research. Others argue the reason was to keep Perrier’s abuse from public view. The closure prompted outrage and a united community effort to “Save Our Springs.” (9)

In a letter, the Southwest Florida Water Management District, known as Swiftmud, cited Bob Thomas for allowing Zephyrhills Spring Water Co. to overdraw its allotment from the springs during July and August, 2000. Figures show that the company took 5,000 gallons per day too much in July and 3,000 a day too much in August. Thomas said the violation was an honest mistake that stemmed from calculating the daily intake of water on a calendar-year average rather than a 12-month rolling average. Terri Wolfe, leader of the Save Our Springs coalition said, “I don’t believe it was an accident…I think his permit should be revoked. We’re in a crisis here. The river is dying. This is Tampa’s water he is screwing with.” (10). Thomas is struggling to get new permits that would allow the water company to boost its daily withdrawals from the springs on his Two Rivers Ranch. One request, for up to 1.8-million gallons a day, (from 301,000 per day) was denied in February 2000 after Swiftmud found that such a dramatic increase would deplete Tampa’s drinking supply. (10)

In 2002, Thomas was granted a 30,000-gallon per day increase permit. As part of the deal, approved in April, Thomas was allowed to take 30,000 gallons a day above his current allowance (301,000 gallons per day) if he found a suitable replacement source outside of the Hillsborough River Basin. Now, tanker trucks carrying thousands of gallons of well water are rumbling from Dade City to Crystal Springs and dumping it into the headwaters of the Hillsborough River. The water is coming from farmer Buddy Rowland’s property near Dade City. (11)

In 2003, Thomas announced plans of opening up a long-promised nature center on the grounds, serving as a “living laboratory” for students to learn about the environment and why the spring is so important to Florida’s ecosystem. Save Our Springs, Inc. President Terri Wolfe, remains skeptical about Thomas’s motives. Although she is glad that the springs will be reopened to some degree, she believes Thomas is doing it to look better in the eyes of the officials who issue permits to pump more water. (12)